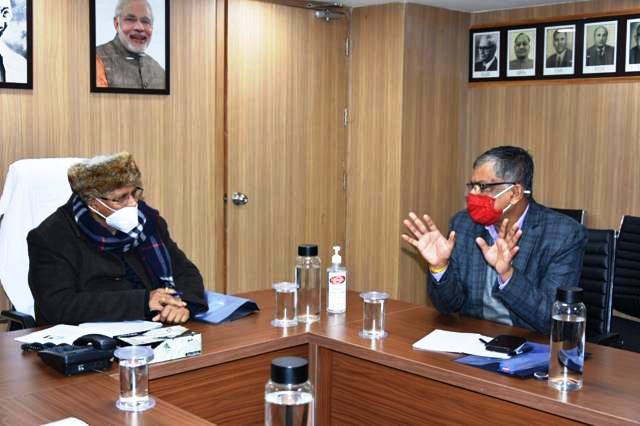 The Minister of State (Jal Shakti) reviewed the progress under various programmes namely, PMKSY and DRIP. He was informed that during the last one and a half year, 10 projects out of 99 priority projects under PMKSY have been completed. He was also informed that the Cabinet has approved DRIP II & III scheme with an outlay of about Rs. 10,000 crores out of which 7,000 crores will be funded by the World Bank and AIIB. He was also informed that under DRIP – I, rehabilitation of 223 dams located in 7 States has been done with an estimated cost of Rs. 3466 crores. Mr. Kataria lauded the role of Central Water Commission in operating this programme.

He was further informed that there will be better water management by formation of river basin organizations. He was worried about the increasing water conflicts in the country. CWC Officials informed that with the passage of ISWRD Amendment Bill, the water conflicts will be solved more quickly. CWC Officials also informed that the passage of ISWRD Bill and Dam Safety Bill is very much necessary for a holistic management of water resources in the country.

During the discussion over flood forecasting and management, an issue pertaining to flooding caused by Brahmaputra river was discussed. The CWC officials apprised about the need for setting up a project at Upper Siang/Brahmaputra which shall be highly beneficial for the state of Assam. Regarding alleged Plan of China to set up a super hydropower station at Brahmaputra at Medong, Tibet, the officials apprised that any attempt to divert water of Brahmaputra river shall act as an encroachment on the entitled rights of lower riparian states like India, Bangladesh and adversely affect the availability of water in the Brahmaputra basin during the lean season. However, there are official platforms – like the Expert Level Mechanism set up between India and China in the year 2006 to discuss various issues related to trans-border rivers.