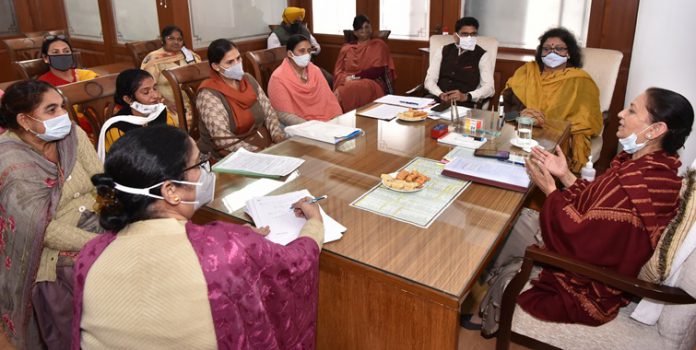 Punjab Social Security, Women and Child Development Minister Mrs. Aruna Chaudhary, on Tuesday, announced to relax the condition of giving job only to dependent widow daughter-in-law of the Anganwadi workers and helpers on compassionate grounds and assured the representatives of Anganwadi Workers Unions to meet all their legitimate demands during three-hour long marathon meeting with them.

During a meeting at her office at Punjab Civil Secretariat, Mrs. Chaudhary said that the existing condition of appointment on compassionate grounds is to give preference only to widow daughter-in-law of the deceased Anganwadi worker and helper, which will now be replaced to any dependent of the concerned worker and helper. She informed that earlier workers and helpers were received ex-gratia after the age of 70, while their retirement age was 65 and now they can claim for ex-gratia anytime between the age of 60 to 65. The Cabinet Minister also announced to reduce the condition of graduation for promotion to Anganwadi Workers to 12th class coupled with experience of five years.

Mrs. Chaudhary also apprised that Anganwadi Workers would be equipped with the Smartphones, which would have dedicated software for the smooth field work. She told that the procurement of smart phones would be initiated immediately after getting the specifications from the union government. “As soon as the set criteria is received from the Government of India, the procurement process will begin”, said the minister, adding that all the anganwadi centers in the state would be provided basic amenities such as potable water and toilets by the end of December 2020.

Mrs. Aruna Chaudhary also emphasized that the efforts would be made to transfer the matter of rent of Aanganwari Centers from the Rural Development and Panchayat Department to Social Security, Women and Child Development Department. She assured representatives of the unions for early release of ‘Performance Incentive’ under the nutrition campaign, saying that after the approval of the new Main Anganwadi Centers, the Mini Anganwadi Centers would be shifted to the Main ones. She also announced to provide Rs.100 per worker and Rs.50 per helper for filling up the forms of Pradhan Mantri Matru Yojana.

The Social Security, Women and Child Development Minister said that the department got the budget in June 2020, which was disbursed among all the District Program Officers and they further distributed the honorarium to the workers and helpers. Apart from this, the department has also received pending liability from the GoI, which will be dispensed soon.

Ensuring the enrollment of 3 to 6 years old children in Anganwadi Centers, she said that this matter along with shifting of the Anganwadi Centers operating in private buildings in the Schools would be taken up with School Education Minister, while the issues pertaining to increasing honorarium of workers & helpers and other financial demands would be taken up with the Finance Minister and to be resolved amicably.