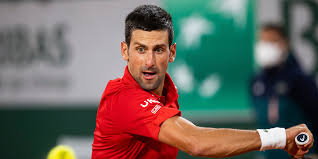 Novak Djokovic advanced to the semifinals at the ATP Finals and eliminated Alexander Zverev on Friday by beating the German 6-3 7-6(4) in an empty O2 Arena.The top-ranked Djokovic set up a match against Dominic Thiem on Saturday as he goes for a record-tying sixth title at the season-ending event, and a first since 2015.

Rafael Nadal will take on Daniil Medvedev in the other semifinal match. Bouncing back from a straight-set loss to Medvedev on Wednesday, Djokovic broke Zverev to take a 2-0 lead in the first set when his opponent double-faulted on the second break point. Djokovic saved two break points at 4-2 before clinching the set with a backhand down the line as he closed in on the net following a serve out wide.

Zverev posed more problems for Djokovic in the second set, and led 2-0 in the tiebreaker. Djokovic then won five of six points and, on his first match point, sent a deep and penetrating forehand that Zverev could only slice into the net on the stretch.

Djokovic reached the semifinals of the event for the ninth time.