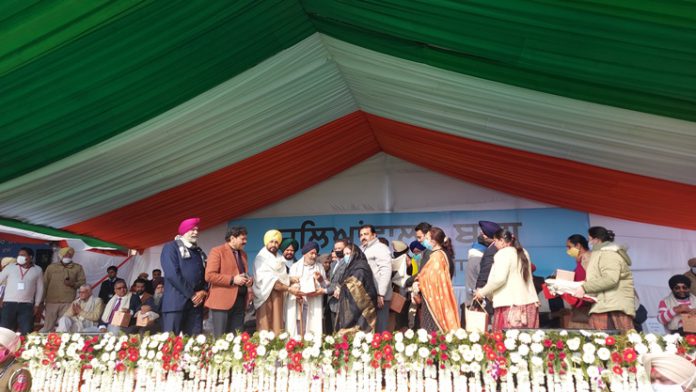 Chandigarh, January 25: Punjab Chief Minister Captain Amarinder Singh on Monday virtually laid the foundation stone of the Jallianwala Bagh Centenary Memorial Park at Amritsar, with an emotional tribute to the unsung heroes and to their families from a poem recalling how “After years still, (we are) carrying the pain of martyrs.”

Remembering the martyrs who sacrificed their lives for India’s independence, the Chief Minister slammed those criticising the state government for setting up their own memorial, the Chief Minister said every Punjabi has the right to remember the unparalleled tragedy that paved the way for the freedom struggle. Terming the centenary celebration a happy occasion, he said he will also participate in the national level celebration of the historic event at the Jallianwala Bagh.

On the occasion, the Chief Minister announced a Jallianwala Bagh Chair at the Guru Nanak Dev University (GNDU) and a literary festival dedicated to the memory of those who lost their lives in one of the world’s biggest humanitarian tragedy. “The sky frequents daily to weep here, The arrows still sting in Punjab’s heart…” he read from Rukshanda Jaleel’s poem on the massacre.

Noting that the exact number of deaths in the massacre was still not known, the Chief Minister asked Tourism and Cultural Affairs Minister Charanjit Singh Channi to ensure that the research into the data is completed so that the exact number can be ascertained and small memorials also can be built in their villages. Pointing out that General Dyer had cited the figure of 200-300 deaths of the 5000 people he said had gathered there, Captain Amarinder said Gandhiji had put the figure at 1500, of which the names of only 492 martyrs were currently available.

He recalled his visit to the Cellular Jail at Kala Pani, where there were many names of Punjabis which nobody is aware of, and directed Channi to also get the information researched and compiled. His government would also build memorials for them in Punjab, he announced.

The Jallianwala Bagh Centenary Memorial Park, to come up over 4490 sq meters at Amrit Anand Park in Ranjit Avenue, Amritsar, will stand out as a remembrance for the future generations. To be built at a cost of Rs. 3.52 crore, the sacred memorial will have soil brought by the kin of Martyrs or Panchayats/Sarpanches/Councillors. The unique memorial has been conceived and designed as five marble fins going up to the sky. The memorial is expected to be completed and dedicated to the people on Independence Day i.e 15th August, 2021. The literary festival will be organised GNDU around Baisakhi with the aim of reconnecting the younger generations with the tragic event.

Earlier in his address, the Tourism and Cultural Affairs Minister Charanjit Singh Channi apprised the Chief Minister about the salient features of the project.  The fins of the memorial symbolize the indomitable spirit of the martyrs of varied age groups viz. Children, Teenagers, Youth, Middle aged and old. They also represent five fingers of the hand, as a unified power of the martyrs. The White denotes the purity of their supreme sacrifice. These fins rise from a circular platform around a central empty space representing the void created by their martyrdom. An elliptical path encloses the green setting of this memorial and the landscaping around is planned in a subtle manner so as not to dominate the proposed memorial structure. The entire memorial delineates serene ambience of the marvellously landscaped park which enhances the beauty of this novel memorial manifold. The soil from the various villages to which these martyrs belonged shall also be brought to fill up below the sacred platform to pay humble tributes to these martyrs from this soil shall rise these fins to go up to the sky. Walls covered in stone engulf the platform with the names of martyrs inscribed on it. A small raised platform is also planned as a place for keeping wreaths in front of the fins as a mark of respectful homage.