Chandigarh, 24 July: To bolster the economy of the state and introduce local food products into global markets, Punjab Government has decided to launch its own processed food brand under the name of ‘Five Rivers’.

Disclosing this here today, Punjab Food Processing Minister Mr. Om Prakash Soni said that under this initiative, food items produced in different districts of the state would be processed and promoted in global markets beneath ‘One District One Product’ program. While revieweing the Prime Minister’s Formulation of Micro Food Processing Enterprises Scheme (PMFME) during a meeting here today, he said that the state government is committed to generate extra source of income for our people. He also informed that the work of conducting district level survey in this regard was being expedited.

The Food Processing Minister directed the officers of the department to work diligently in this direction. He said that we have decided to launch own brand in the market so that the popular food items of the state like Papadom, Sun Dried (Vadiyan), Pickle, Muraba (Preserved Friut) and Ayurvedic herbs etc. available in Amritsar and Hoshiarpur districts, will be known all over the world under one name. “Every feasible step to be taken to provide the benefits of this scheme to the farmers of the state and those engaged in horticulture and poultry farming”, he said, adding that in order to expedite the shipment of vegetables and fruits from the state to foreign countries through air planes, we will take up the matter with Union Civil Aviation Ministry for early start of the facility at Amritsar International Airport. The produce of the farmers of the state especially farmers of Amritsar and adjoining districts could be sent to foreign countries by air.

During the meeting Anuridh Tewari Additional Chief Secretary, Food Processing Department, informed that under this scheme 6600 processing units of the state would be provided Rs. 660 crore by the Central Government and the State Government for the renovation and upgradation. 60 per cent amount would be borne by the Union Government and rest 40 per cent is owned by State Government. He disclosed that 70 per cent amount of the total fund, will be given to old units for upgradation and 30 per cent for setting up new units. 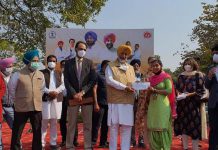 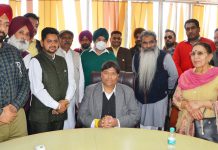 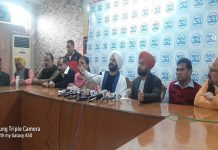