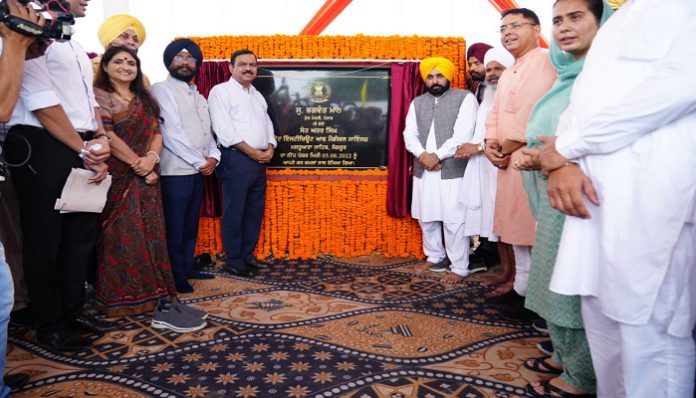 Announces Provision Of Social Security Benefits At The Doorsteps Of Beneficiaries

Sangrur: Punjab Chief Minister Bhagwant Mann on Friday laid the foundation stone of Sant Attar Singh State Institute of Medical Sciences at Mastuana Sahib to come up over an area of 25 acres with an estimated cost of nearly Rs.345.00 crores.

Reiterating firm commitment of his government to provide quality medical facilities to people, the Chief Minister said that this institute will be a step forward towards this direction. He said that this project will be a humble and befitting tribute to the great religious leader Sant Attar Singh, who propagated the message of universal love, peace and communal harmony to people. Bhagwant Mann also recalled the immense contribution of Sant Attar Singh in spreading the light of education in the entire region.

The Chief Minister envisioned that this college with MBBS seats will emerge Sangrur as a hub of medical education in the entire region. Bhagwant Mann said that apart from construction of Academic block the project will include upgradation of existing Civil Hospital Sangrur from 220 bedded to 360 bedded, construction of Nursing School, separate hostels for Senior/Junior Girls and Boys, Sports Track & Pavilion for students, open Air Theatre for extracurricular activities, faculty residence and shopping complex.

Likewise, he said that widening of approach road from NH-07 to State Institute of Medical Sciences from 5.50 m to 7.00 m including Four Lanning of the road in front of the Institute is also a part of the project.

The Chief Minister expressed hope that this upcoming Medical Institute will act as a pivot for imparting quality Health services and Medical education to Punjab in general and Malwa region in particular. He directed the officers to ensure that the work on this ambitious project was completed in a time bound manner adding that work on Medical college will be completed by March 31, 2023 and academic session will commence from April 1. Bhagwant Mann also asked the officers to ensure that highest quality norms were adhered to during the construction of this state-of-the art medical institute.

The Chief Minister further said that the state government is formulating several pro-people and development oriented schemes for the well being of people. He said that there is no dearth of funds for this purpose and impetus will be given to all round development of state. Bhagwant Mann assured the people that no stone will be left unturned for progress of state and prosperity of its people.

The Chief Minister said that the state government is committed for providing social securities to the people. He said that pension will be disbursed directly to the beneficiaries at their doorsteps. Likewise, Bhagwant Mann said that Food security will also provided to people by providing Atta-Dal at their homes.