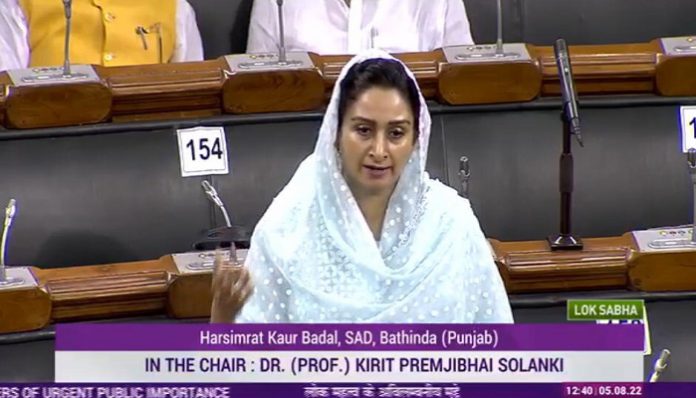 Also calls for upgrading AIIMS, Bathina trauma centre to 300 beds besides calling for action against govt functionaries and insurance co which had scammed Pbis by defaulting on providing health cover to them

Chandigarh: Bathinda MP Harsimrat Kaur Badal today demanded the centre give a financial package to Punjab to compensate its farmers for the huge losses suffered by them due to recent flooding following incessant rains as well as repeated crop failures.

Speaking in parliament, Mrs Harsimrat Badal also requested the union health minister to sanction funds for upgrading the trauma centre at AIIMS, Bathinda to 300 beds. She said the institute’s emergency block could handle only 28 emergencies. “Since three national highways and two Stage highways crisscross the city leading to a high incidence of accidents besides the presence of both the army and air force cantonments, the trauma centre at AIIMS, Bathinda should be upgraded immediately”.

Mrs Badal also focused on how the AAP government was failing in its duty to implement the Ayushman Bharat Sehat Bima Yojna and how Rs 300 crore was due to private and government hospitals in the State. She also highlighted how Punjabis had been denied health cover insurance with both the previous Congress government as well as the current AAP dispensation failing to take any action against the insurance company which had defaulted on its contract. She requested the union health minister to take action against both government functionaries and the insurance company which had scammed the people of Punjab.

Earlier while demanding a financial package for Punjab farmers, the Bathinda MP highlighted how they had suffered losses in rearing both the previous wheat crop and the present paddy crop besides witnessing three successive failures of their cotton crop. She said while the wheat yield in Punjab had decreased due to sudden increase in temperature in March, the current paddy crop had been damaged due to flooding caused by incessant rains in the Malwa region. She said earlier farmers had witnessed failure of three successive cotton crops due to pink ballworm and white fly attacks.

The Bathinda MP also highlighted how the AAP government had failed to do anything for the suffering farmers with chief minister Bhagwant Mann conducting an aerial tour rather than meeting farmers and providing relief to them. “It was left to the SAD President Sukhbir Singh Badal and SAD workers to conduct relief measures. I have also contributed to this task but much more needs to be done and a financial package should be provided to cover the losses of farmers as well as agricultural labour”.

She also highlighted the loss suffered by farmers because of the callousness of the AAP government with chief minister Bhagwant Mann urging farmers to sow Moong and promising to procure it at a minimum support price (MSP) of Rs 7,225 but leaving them to the mercy of private players. “While four lakh tonnes of Moong arrived in State Mandis only ten per cent of this was procured by government agencies”, she added.