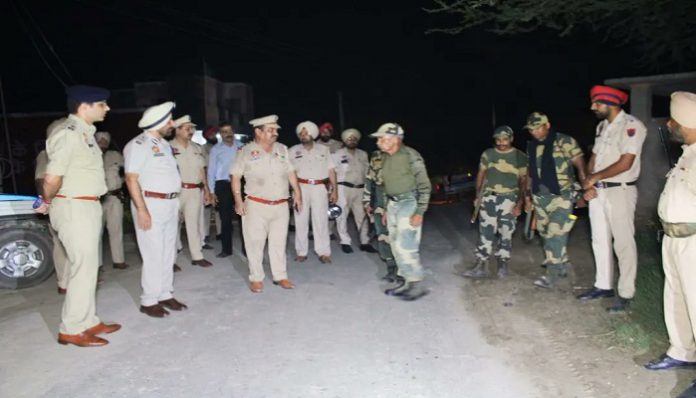 AMRITSAR: In order to strengthen the security at Border districts of the state on the directions of Punjab Chief Minister (CM) Bhagwant Mann, Punjab Police in a joint operation with Border Security Force (BSF) conducted a night domination/checking near the second line of defence followed by search and cordon operation in the border villages on the intervening night of Thursday and Friday.

The operation took place at a time when Punjab, which shares 553 Kms of International Border with Pakistan has been seeing a huge influx of consignments of drugs (heroin), arms/ammunition, explosives, grenades etc through drones and other means. This signals that major attempts are being made by anti-national elements to disturb the peace and communal harmony in the border state.

Giving out more details, DGP Gaurav Yadav said that the operation included all-nights nakas at around 100 places in the border districts, followed by  special search and cordon operations of suspected houses and villages. All the SSPs of the concerned districts have mobilised maximum manpower for this operation, he said, adding that as many as 60 Gazetted Officers and 2500 NGOs/EPOs including 28 Armed Police Coys were deputed to conduct this operation.

Calling for total synergy and teamwork between BSF and Punjab Police, DGP Gaurav Yadav said that it is time that both the elite forces should work as one team to counter this new threat from across the borders.