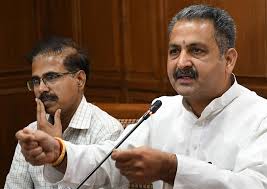 As part of the initial drive by Punjab Education Minister Mr. Vijay Inder Singla to bring qualitative improvement in school education, the education department has now started the process of opening English Booster Clubs (EBC), which are likely to accelerate further enrollment trend in government schools.

According to a spokesperson of the education department, as a result of the new initiatives taken by Mr. Singla in school education, the enrollment during the current academic session 2020-21 has increased by more than 15 per cent as compared to last year. This new initiative of the government is likely to increase the attraction towards government schools. According to the spokesperson, English is always a priority for parents when choosing a school for their children. Private schools have been preferred by the parents of the students especially in terms of English education and with the rise in the standard of English in government schools, people are now showing very much interest in government schools.

According to the spokesperson, The main objective of EBC is to improve the English communication skills of the students of class VI to XII in government schools. The project has been launched since October 12 and so far English booster clubs have been set up in about 7,000 schools. In the first phase, three students from each section or class will be taken and motivated to create curiosity about English. According to the spokesperson, this would enhance the English speaking ability of the students and increase their knowledge of English language in all aspects. In addition, students of government schools will be able to compete with the students of private schools with English medium.