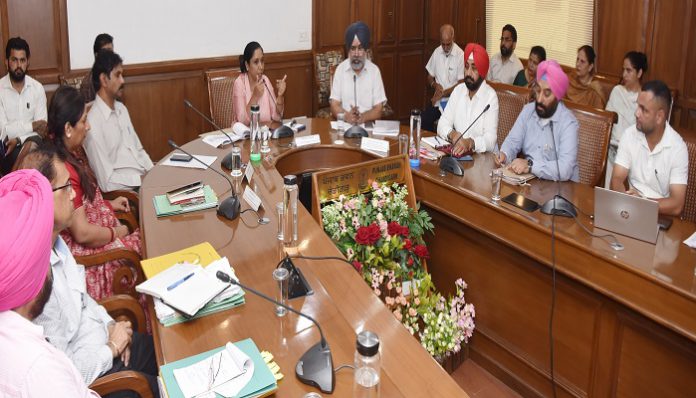 Chandigarh: Reiterating its commitment for the welfare of the Scheduled Castes, Backward Classes and Minorities, the Punjab Chief Minister S. Bhagwant Mann led government is ensuring the deliverance of government schemes in possible minimal time.

Stating this, the Social Justice, Empowerment and Minority Minister, Dr. Baljit Kaur instructed all the officials of department that if she received complaint of unnecessary obstruction by any official or employee for providing benefit to the beneficiary, strict action will be taken against the erring one.

While presiding over review meeting of the department here at Punjab Bhawan, Dr. Baljit Kaur said that the state government has increased budgetary allocation for the welfare of Scheduled Castes, Backward Classes and Minorities by 47% as compared to the previous financial year.

“Ensure that the applications received under the Ashirwad scheme are to be settled at the earliest”, said the Minister, directing to pay the benefits worth Rs.160.23 crore for the period from November, 2021 to March 31, 2022 to 31418 beneficiaries.

Reviewing the Post Matric Scholarship Scheme for SC/BC, she informed that Dr. Ambedkar Scholarship portal was opened on April 21, 2022, on which 50851 students have applied till August 3, 2022. The Minister directed that the claims received from the eligible students should be sanctioned in a time-bound manner and the proposals should be sent to the executing departments so as to ensure the timely delivery of the benefits to the students.

“It has come to my notice that some people are taking advantage of fake certificates of Scheduled Castes thus robbing the rights of people of Scheduled Castes community”, said the Dr. Baljit Kaur, instructing the officials to immediately deal the complaints against such people and take action as per the law.