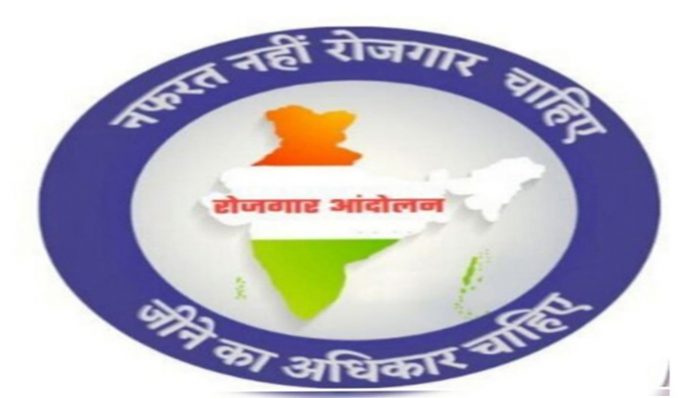 New Delhi: A memorandum was again submitted by SRAS to the Honourable Prime Minister in the context of passing a law in Parliament for formulating a national employment policy against rising unemployment. A memorandum was sent to the Prime Minister by ‘Desh Ki Baat Foundation’ on 20 December 2021 in which a request was made towards the Central Government to formulate and implement a ‘National Employment Policy’ to solve the problem of unemployment.

The memorandum was accompanied with a draft of the ‘National Employment Policy’, which was primarily prepared by the Desh Ki Baat Foundation in collaboration with the country’s eminent economists, sociologists and research scholars.

Krishna Yadav, a member of the Sanyukt Rozgar Andolan Samiti, told that the Prime Minister has sought time to discuss the national employment policy. SRAS has requested Prime Minister to kindly grant us an appointment on any day at any time in between 16 to 22, so that the leaders of national employment policy can meet with him and can discuss with him on the draft of the National Employment Policy.

The Prime Minister had not take any decision on the national employment policy against unemployment. Krishna Yadav has said that, on behalf of SRAS, we had submitted a memorandum to the Prime Minister’s Office, in respect to which we received a letter in January 2022 confirming the acceptance of our memorandum. And also it was told that it has been sent for further action, but so far no positive action has been taken on it.

Due to the increasing unemployment in the country, from 16 to 22 August, the Sanyukt Rozgar Andolan Samiti will protest at Delhi’s Jantar Mantar

Due to the rising unemployment in the country, from 16 to 22 August, the Sanyukt Rozgar Andolan Samiti will organize a protest at Delhi’s Jantar Mantar. SRAS member, Krishna Yadav said that the central government is not taking any positive steps to solve unemployment. Henceforth, to formulate national employment policy and to pass it as a law in the parliament, from 16 August to 22 August at Jantar Mantar, several bodies comprising of students, youth, trade unions, farmers, women, Dalits, tribals, from all over the country, Representatives of organisations like Minorities, LGBTIQA+, Teachers, Journalists, NGO’s etc. are reaching to join the protest organised by the ‘ Sanyukt Rozgar Andolan Samiti. 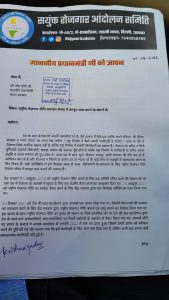 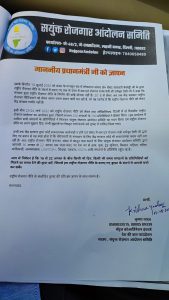