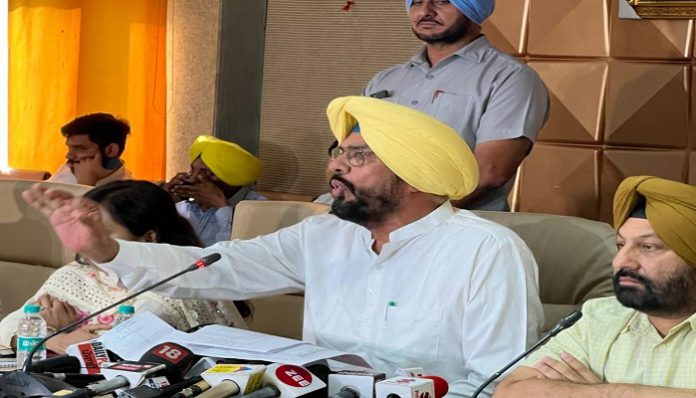 Announced to set up a government veterinary hospital at village Chhaleri Kalan of Fatehgarh Sahib district for relinquishing illegal encroachment over 417 acres of panchayat land.

Chandigarh/SAS Nagar: Taking stringent action against unauthorized occupation of public land, the Rural Development Department has removed encroachments from 1008 acres of panchayat land in the last 12 days and handed it over to the government. Divulging the details, Punjab Minister for Rural Development and Panchayats Kuldeep Singh Dhaliwal said that under this special drive against encroachment, launched on the direction of Chief Minister Bhagwant Mann, encroachments have been removed from the land minimum worth Rs.302 crore so far by the department.

Dhaliwal said that following appeal by CM Mann many people have come forward to relinquish encroachment from panchayat land. The Department is rewarding those persons. Minister informed that today, people of village Chhaleri Kalan, Fatehgarh Sahib district has voluntarily given up illegal occupation at 417 acres of panchayat land and rewarding the village for this initiative, the state government will set up a government veterinary hospital in the village. Similarly, in Doaba, a potato grower has voluntarily handed over 35 acres of land, which he illegally occupied for years.

He also appealed to the people to give up encroachments from panchayat lands on their own for the betterment of Punjab. Earlier, CM Mann on Wednesday urged people to immediately hand over the land the government or panchayat land in illegal possession to state government by May 31 this otherwise a legal action shall be initiated against them. Financial Commissioner Rural Development Seema Jain, Director Rural Development Gurpreet Singh Khera besides senior officials of the department were also present on the occasion.