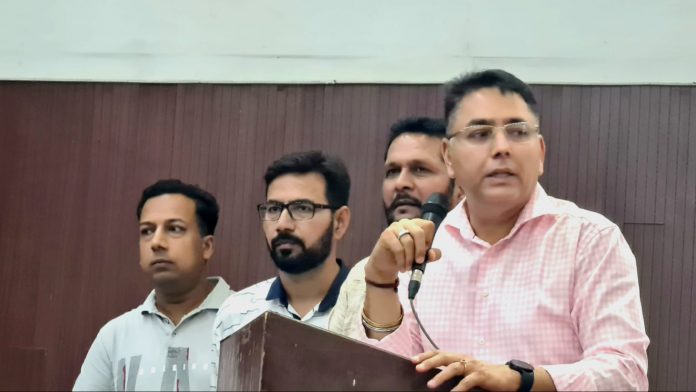 Chandigarh – An Industrial Estate will be set up at Sunam Udham Singh Wala to boost industrial activity in the state, said Aman Arora, Punjab Housing and Urban Development Minister, while addressing an interactive session with industrialists and businessmen, on Saturday, at SUS College, Sunam.

Stressing on the importance of interactive sessions at ground level, Aman Arora said that they help the government to understand the practical issues being faced by the industry, while also helping to draft pro-industry policies. The purpose of the session with industrialists was to understand the requirements for the proposed new industrial estate at Sunam Udham Singhwala.

Responding to complaints from industrialists about delays in obtaining CLU and NOCs, the minister said that the state government is planning to simplify the process of CLU certificate and the new system will be implemented soon.

Industrialists and businessmen demanded that the last date of OTS to clear outstanding dues of VAT should be extended to at least December 31. MP Singh, General Secretary SDIC, said that the cap of development tax being implemented on the employees should be increased from 2.5 lakh to 5 lakh.

Responding to the suggestion of Balwinder Jindal, an industrialist about the usefulness of  focal points in establishing new units, the minister said that the land pooling policy to develop industrial parks has become a success in Punjab and the focal point at Sunam could also be developed under this policy.

Aman Arora assured them every possible support at the government level as the Mann Government is committed to create a business friendly environment and promote industrial activity in Punjab.

The Cabinet Minister stated that Chief Minister Bhagwant Mann led Punjab government is making all-out efforts to ramp up the infrastructure in commercial and industrial spaces in urban areas equipped with ultra-modern amenities, which will further help to expand the state economy.

The state government was fully committed to ensure business friendly environment to promote the industry in the state,